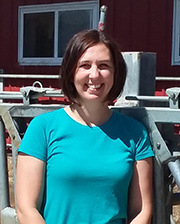 Vision Aire Farm, LLC
Rosendale, Wisconsin
Janet Clark is ‘at home’ on the farm. In 1972 her parents, Roger and Sandy Grade, bought the farm that operates today as Vision Aire Farm, LLC. Janet grew up on this 140-cow registered Holstein dairy east of Eldorado in Fond du Lac county.

Though farming is a livelihood that runs five generations deep, Roger is the first-generation dairy farmer, having started Vision Aire with six cows and some offspring. Sandy grew up a “city kid” but acclimated quickly after they bought the 130 acres that included the barn and house. Soon they were raising a family of four.

Janet was attending University of Wisconsin-Platteville when she met her husband, Travis Clark. After they graduated and married, they remained in the Platteville area for a few years, both working full-time and travelling most weekends to Eldorado with their two young daughters. “We were coming here more and more often when we finally asked one another, ‘why do we live so far from both of our families?’”

During their weekends on the farm they always pitched in to help with chores. Janet explained, “We got the bug to get into dairying.” Currently Janet and Travis live a few miles away from the dairy in Rosendale, but their children Grace, 13; Eve, 10; and Levi, 6, are always eager to spend time on the farm. “To see their excitement and love for the farm is such a blessing,” Janet said. “I just love having all the generations here.”

Janet’s degree in agri-business management comes in handy as she guides the financial decisions of the dairy. Janet’s brother David manages crops, feeding, equipment, building projects and works closely with Travis, a UW-Platteville Soil and Crop Science graduate - on the milking herd’s ration and other feed-related issues.

Travis and David have proven to make a great team when it comes to managing the milking herd – Vision-Aire consistently produces milk with somatic cell counts of around 60,000. In 2015 and 2016, they were awarded the National Dairy Quality Award, an honor bestowed by the National Milk Council and Hoard’s Dairyman.

“Facilities and feed are tied to milk quality,” Janet said. “David and Travis do a great job keeping the cows healthy. When cows are healthy their bodies can put up a much stronger defense – and it shows in their somatic cell counts.”

Travis and Janet take care of the calves raised on the farm. “I feed the calves morning and night,” Janet said. “Raising good quality calves is important to me.” At eight to nine months old, calves are sent to a custom raiser; when they’ve been confirmed pregnant 60 days, heifers return to Vision Aire.

Each month the Vision Aire team meets to update one another on their responsibilities. Last fall, Janet enrolled in PDPW’s inaugural Financial Literacy for Dairy class and has found it to be incredibly helpful. “I loved that class!” Janet said. “I’d do it every year if I could. It has really helped our farm plan – now we’re managing our financial decisions rather than reacting. I’ve learned which ratios to look at and how to determine what will happen if we make specific changes – it’s a great program.”

In March, Janet was elected to the PDPW Board of Directors. As an advocate of PDPW programs, the dairy industry and the family farm, Janet thinks of herself as a representative of smaller-scale dairying. She said, “I originally considered PDPW to be an organization for ‘more professional dairy producers’ but now I see that it’s for every dairy producer.”

“It is hard to get away for a day – but I know when I spend a day away from my farm at a PDPW program I’m going to learn something I’ll be able to bring back. For what we get out of attending, it’s absolutely worth it.”
« RETURN TO PRODUCER SPOTLIGHT
HOME